This traditional Southern dessert is the perfect combination of elegance and ease. 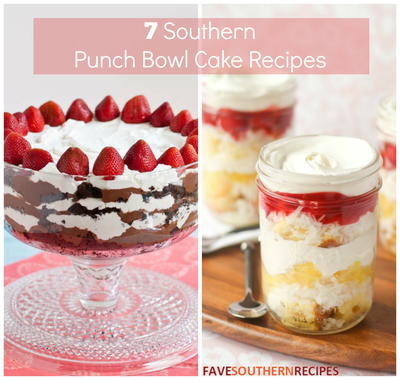 If you are interested in making homemade Southern desserts but don't want to spend all day in the kitchen, then Southern punch bowl cakes might be for you.

This collection of 7 Southern Punch Cake Recipes will show you the virtues of this classic Southern dessert. Layered punch bowl cakes are elegant and impressive, but assembling them couldn't be easier. Traditionally, to make Southern punch bowl cake, prepared or store-bought cake is cut up and layered with a pudding mixture, various types of fruit, and whipped cream.

There are variations between the different recipes, but these punch bowl cakes all have two things in common: they are delicious and impossibly easy to make.

For more Southern desserts, be sure to download a free, printable copy of Heavenly Southern Desserts: 9 Easy Cake Recipes 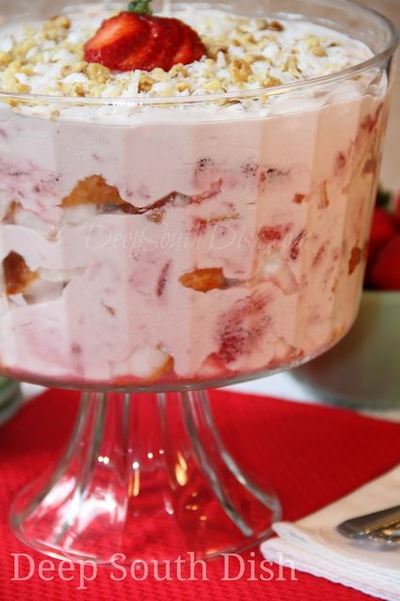 Other Recipes for Punch Bowl Cake 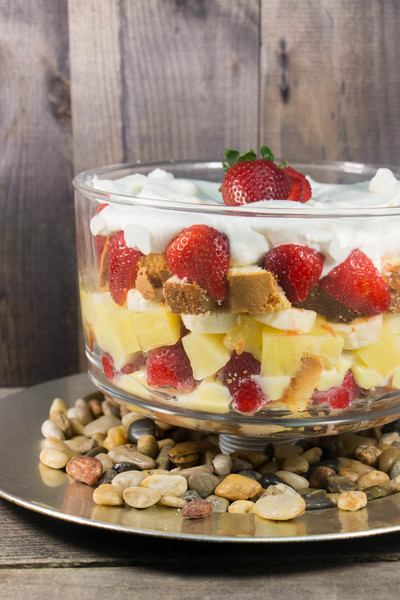 What's the Difference Between a Punch Bowl Cake and a Trifle?

Merriam-Webster defines “trifle” as “a dessert made of layers of cake, jam or jelly, and custard and topped with whipped cream.” Since punch bowl cakes and trifles can both be described by this definition, the true distinction comes down to regional differences in vernacular.

In colonial America, the punch bowl was a status symbol and the size of the bowl corresponded with a family’s societal importance. However, as glass punch bowls became more affordable, they became more common household items. Punch bowls played a large part in Southern culture, in that there was usually a punch bowl present at every social gathering from weddings to family gatherings to baby showers. Since it became so common for a household to own a punch bowl, these vessels became a sort of multi-purpose dish for both punch and desserts.

In the dessert recipe itself, there is essentially no true difference between a punch bowl cake and trifle. Rather, the “punch bowl cake” is a regional term that acknowledges the history behind the Southern punch bowl as well as its cultural significance in the South. 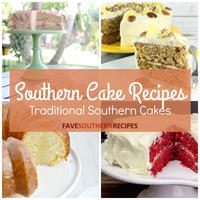 What does your family call this dessert - punch bowl cake or trifle? Let us know in the comments!

I only ever knew it as a Trifle and that is what it will always be. Punch Bowl Cake sounds lazy and more like you are just dumping things into a punch bowl. The one thing about Trifles I hate is all the work it takes to put together, but the end results is what makes it worth it.

This is Punch bowl cake for both me and my family. And might I add, very delicious indeed.

We usually call it trifle

We call it Punch Bowl Cake.

I would call the Lovely Layered Punch bowl Cake a Trifle only because it sounds like something fancy.

We've always called it a trifle.

I've always referred to these types of desserts as trifles. In fact, I've never heard the term punch bowl cake until now!

Everyone I know calls it trifle. I had never heard it called punch bowl cake before!

I didn't know this was a thing, but I'm glad to know there is more than one use for a punch bowl. Also, we call them trifles.

I will try it, new to the site loving it so far !

I've always identified the dessert as a Trifle, usually made with berries in season.

Punch bowl cake or trifle, who cares! You can call them Stuff I stacked, I dont care. I love them regardless of what you want to call them. The possibilities are virtuously endless when it comes to desserts like this. These recipes are great. My favorite is the Strawberry punch bowl cake.

In Canada it is called Trifle. It's a great way to keep the kitchen cool in the summer and yet serve an elegant dessert.

Definitely trifle for me - I'm English and live in Canada.

it's called a trifle!

We call it trifle

that would be called Trifle in our house (Canada)

We call the dessert a trifle.

We call it a punch bowl cake! Looks so good.

We call it trifle and we love it. The fruit, cream, cake and brandy combination are just delicious. We usually make it during holidays like Easter and Christmas. It is a practical dessert, because it feeds a large crowd.

This would be called trifle.

Wow, these punch bowl cakes are beautiful! I would definitely be impressed if I saw one of these at a party. I can't believe how easy they are to make!

Tried this recipe? What did you think? 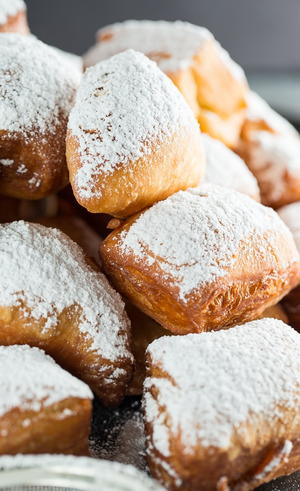 Just Like New Orleans Beignets is the fried food recipe you've been dreaming about. If you aren't able to travel to New Orleans to… See more